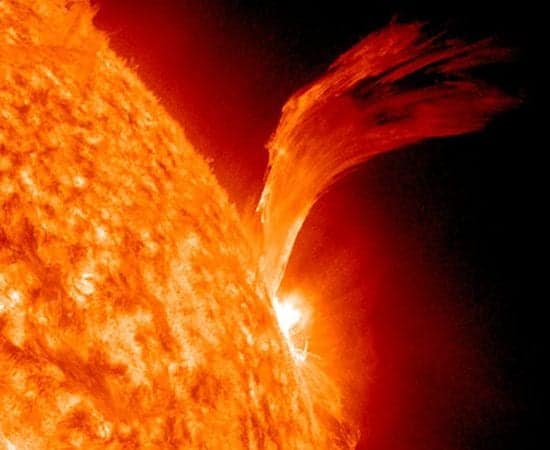 According tho new NASA simulations, the moon gets periodically “sandblasted” by intense solar storms that can strip tons of material from the lunar surface.

Solar wind is a stream of charged particles, or ions, that are emitted in all directions by the sun. Scientists previously knew that solar ions can collide with and eject material on the moon’s surface in a process dubbed sputtering. But a new computer simulation finds that this sandblasting effect kicks into high gear during intense bursts of solar plasma—charged gas—known as coronal mass ejections (CMEs). A strong CME can hurl about a billion tons of solar particles at up to a million miles (1.6 million kilometers) an hour in a cloud that is many times the size of Earth.

When intense heat or radiation is applied to a gas, the electrons can be removed, turning the atoms into ions. This process is referred to as “ionization”, and creates the fourth form of matter, known as plasma. Our Sun’s intense heat and radiation excites gaseous emissions, thus creating a solar wind plasma of charged particles. When plasma ions eject atoms from a surface, the process is called “sputtering”.

Usual solar wind is made up of only protons, but CMEs consist of ions of much higher molecular weight such as helium, oxygen and even iron. These heavier particles slam into the moon and knock off a lot of matter from its surface. It comes in the form of a massive cloud of plasma and dislodges a lot of volatile substances from the surface of the moon. Our Moon has the faintest traces of an atmosphere, which is technically referred to as an exosphere. The lack of any significant atmosphere, combined with the lack of a magnetic field, makes the lunar surface vulnerable to the effects of CMEs.

Studies predict 100 to 200 tons of lunar material—the equivalent of ten dump truck loads—could be stripped off the lunar surface during the typical two-day passage of a large CME. Once ejected, about 90 percent of sputtered moon particles escape into space, where they become ionized and are drawn into the solar wind.

Moon Landing Footprints in No Danger

While the new model hints that the amount of lunar material stripped off by sputtering is more than scientists had thought, the amount of lost material is still very small compared to the total mass of the moon. Also, the loss of lunar surface material is more or less balanced by incoming particles from micrometeorites, meteors, and the solar wind itself.

That means Earth’s only natural satellite—and the features on it—are in no danger of being eroded away anytime soon.

“The astronaut’s footprints will still be there in recognizable form after a million years—if we’re still around to see them,” said Richard Elphic, a planetary scientist at the NASA Ames Research Center in California. 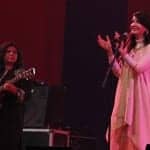