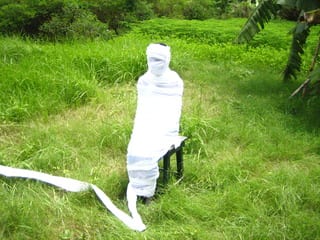 A quarter of million farmers in India have committed suicide in last 16 years, an average of one suicide every 30 minutes.

Farmers are burdened with debt, failed monsoons, failed crops, and a falling government .As India booms, shines, and globalizes with one eye on china and other on its neo-liberal agendas .What is to become of these small farmers? Why are these death tolls not affecting us, as a nation? What is this disconnecting? If we open up our agriculture to the global market what will we, a nation one billion and growing, eat?
These questions related to land distribution ,land use and farmers suicides ,in all their ramifications ,have now found a place in a debut solo exhibition titled PRO.JECT 2012.01 by New York based artist Kiran Chandra who converts a gallery space into a farmer’s domain at Shrine Empire,7,Friends colony(West),New Delhi.

It took a while to locate Shrine Empire gallery. Without any signage to mark it, it takes several minutes to find the gallery in the basement of one of the larger bungalows in the area, when I reached their, first thing that caught my attention was,

These are the elements which make up the installation in the space of Shrine Empire Gallery. The gallery loses its pristine white walls and becomes an immersive environment where there is soil under your feet, the bluest of skies above and green fields around.

In viewing the work, rhythms surface between the writing on the wall to the shrouding of the site of the gallery. Images from the video surface in the drawings, which in turn play with the stability of the sculptural objects in the space. No one piece stands alone or occupies that revered status of art object. The subtle connections within the materials point at the interdependence of life. The space which alludes to the natural is a complete construct resonating that disconnect further.

The intention of the artist is to comment and contemplate issues of land distribution, its use, and the growing divide between the urban and rural realities of India. Who gives, who gains. In the ‘profit above people’ practices of Capitalist economies, power disconnects us from ourselves. Questions and implications hover in this strange immersive diorama.

In a special panel discussion with Anusha Rizvi, Arunkumar HG, Pradip Saha, Ravi Agawal, and Kiran Chandra moderated by Latika Gupta at the gallery itself, various issues, and questions on Art, its political value and effect and similar topics were discussed.
“Peepli Live movie director Anusha” also talked about her experience she had while directing the movie, how she used celluloid for shooting the film and then converted it into digital and similar feelings.
The entire Panellist was related to art in a direct or indirect way.

Kiran Chandra is an artist and educator living in Brooklyn in New York She did her B.A in St. Stephens College in Delhi and is currently getting her MFA at Hunter College in New York. She had her first solo in Kolkata and has shown with Project 88 in Mumbai. She has also exhibited widely in the U.S. She has taught with the Museum of Modern Art, Dia Art Foundation, Museum of the Moving Image among other educational institutions in New York.

This is her first solo exhibition in Delhi.