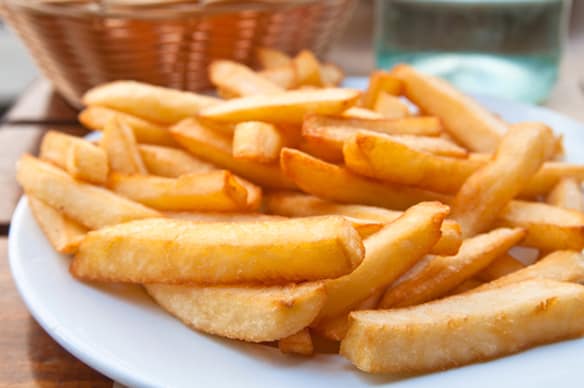 What is the recipe for the World’s best french fries ?

We all love french fries but I can bet, you wouldn’t have tasted what you might end up after reading this post. Yes, we reveal the amazing secret recipe of the world’s most yummiest french fries. This recipe has been personally tested and approved by me (a self-proclaimed foodie).

I am a total foodie and love delicacies that quench my taste buds. So try this thrice-cooked method and I promise, Mc Donald’s bucket of fries will never do for you ever again. We’ve all heard of double-frying potatoes for better fries but going the additional process of blanching them before frying and frying again means the BEST fries. I discovered this process at a food blog, gave it a test and never looked back. The fries that came out after the process were so amazing, just crisp brown from the outside with a thin layer and tender in the inside. And all of this even when the fries were like 1/4 inch wide.

Its not that difficult to make these tasty potato fries but sure need some effort. After all, good things don’t come easy. So lets get started with the recipe, and this has been divided into easy steps so that even a newbie cook can give this a try.

How to make the tastiest potato FRENCH FRIES?

Peel potatoes and cut as evenly as possible into 1/4-inch thick strips. Don’t make them too thin or they would break up into smaller pieces. It’s good if you make them thicker than 1/4th inches but certainly not thinner. If leaving skin on, give them a good scrub with a brush under cool running water.

Rinse the cut potatoes and soak for about 30 minutes in a bowl of ice water. This is basically done to remove a greasy layer above the potatoes. Change water at least twice and afterwards drain all the water. If you want to speed up the process you might just wash these potatoes in running water in a sieve for 5 mins . But it’s just better if you follow the longer process.
Now, in a deep pot, pour enough water to cover into a boil. Add 2 spoons of salt in the water. Put potatoes into the hot water and blanch to just soften but still firm for about 3 to 5 minutes. Don’t boil them too much. It’ll be okay if they are little hard.

With a slotted spoon, take out potatoes from water and arrange on a sheet pan. Cool and air-dry in refrigerator for about 30 minutes. This is important as this would give the potatoes the hard outer layer.

In a heavy-bottomed deep pan, heat oil to around 300 F to 325 F. In batches and without overcrowding the pan, fry potatoes for about 3 minutes and take them out from pan before they achieve color. Place back on the tray and chill potatoes again in refrigerator for another 30 minutes.
Meanwhile, increase temperature of oil to about 375 F degrees. In batches and without overcrowding pan, fry potatoes again but this time until they turn golden brown. With a slotted spoon, take out from oil and drain on paper towels. Season with salt (to taste) and serve immediately. Make sure to heat oil back to 375 F between batches.

Your french fries are all ready to serve. For best taste, serve them with tomato ketchup. Or any other dressing you may like.

What is “FRENCH” in french fries?

Thomas Jefferson at a White House dinner in 1802 served “potatoes served in the French manner”. In the early 20th century, the term “French fried” was being used in the sense of “deep-fried” apart from potatoes, for foods such as onion rings or chicken.
It is unlikely that ‘French fried’ refers to ‘frenching’ in the sense of “julienning” and is not attested until after ‘French fried potatoes’; previously, Frenching referred only to trimming the meat off the shanks of chops.

So now, when you have made these French Fries, do tell us your opinions! 🙂

Why Doesn’t Coffee Work for some people?