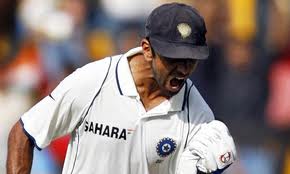 The Wall: too strong to drill and too tall to ascend

The Ninth day of March 2012, when The Great Wall of India hanged its boots and another invincible and formidable legacy was written in golden words in textbooks of Cricket history. Rahul Dravid, the Right-handed Indian skipper called-off his Test career on Friday, at a Press conference in Bengaluru.

One of the greatest batsmen in the history of cricket, Rahul Dravid holds the record for second highest career runs in Test Cricket of massive 13,288 runs after the Indian batsmen Sachin Tendulkar.  Dravid, the former Indian captain had already called off his career in One Day International cricket with his last match being played in the Indian tour of England in 2011. There, Dravid played his only T20 which glitters his career with consecutive three massive sixes. A cricketer of  unique style, he stands tall among others as a great batsman, great fielder, great wicketkeeper, and surprisingly an exceptional bowler at times. The list of achievements is long enough and cannot be described in mere articulation.

The first non-Australian to address at the Bradman oration, ended his 16 year long career with hanging his boots while at the pinnacle of his cricketing talents. Rahul Sharad Dravid, also holds a record of maximum catches in the Test Cricket career. Nick named as Jammy, he has always been a consistent performer of the game and a substantial source of reliability whenever the team calls for it.

If you have witnessed a speeding bowler from the far end with his bullet delivery of ball at about 150 kmph, and suddenly the whack is witnessed by a classic defense or a masterly leave in keeper’s hands, this shall surely accentuate the powerful Test Cricketer in his batting style. Yes, the brick has been rising since 1996 to reach at a position of a wall so high that it seems indispensible to look at a team without his support. Rahul Dravid, Mr. Dependable has always proved to be the backbone of the Indian batting line-up. With 36 centuries and an average of 53.19 in Test Cricket, Dravid not only holds his place in this format, he excels his batting career in One Day International Cricket as well. With a score of more than 10,000 in both formats of the game, the legacy set by this man is beyond the level of praise. Dravid also holds the record of maximum runs scored in partnerships with various batsmen at various numbers.

Rahul Dravid has always been a calm, composed batsman with his typical defensive and adroit batting skills. He has served the nation with his superb cricket which shall never lose its glory in future. He shall however, continue to portray his talents in upcoming IPL season. Even if the wall pauses to rise up to skies, the stronghold has already been established by the great man.

“There was and is only one Rahul Dravid. There can be no other. I will miss Rahul in the dressing room and out in the middle” – Sachin Tendulkar