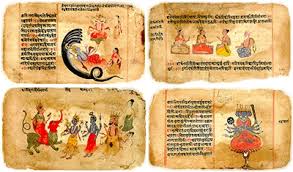 What are the “vedas” and who wrote them ?

Vedas the old ancient scripture and text have been stated at the world’s oldest piece of literature. They were complied at a time in India when rest of the world was still busy with hunting and hardly knew about even living nicely.

The Vedas (Sanskrit वेद véda, “knowledge”), a large body of texts originated in ancient India. Composed in Vedic Sanskrit, the texts constitute the oldest layer of Sanskrit literature and the oldest scriptures of Hinduism.

The class of “Vedic texts” is aggregated around the four canonical Saṃhitās, of which three are related to the performance of sacrifice (yajna) in historical Vedic (Iron Age ) religion:

The Vedas are to believed as “un-authored” by any human or divine form and represents a form of self-evident means of knowledge. These compilations were compiled around 1500–1000 BCE. The Vedas are treated as being eternal. So no one actually wrote it and this knowledge is said to be heard by rishis.

The Vedas consist of several kinds of texts, all of which date back to ancient times. The core is formed by the Mantras which represent hymns, prayers, incantations, magic and ritual formulas, charms etc. The hymns and prayers are addressed to a pantheon of gods and a few goddesses important members of which are Rudra, Varuna, Indra, Agni, etc. The mantras are supplemented by texts regarding the sacrificial rituals in which these mantras are used as well as texts exploring the philosophical aspects of the ritual tradition, narratives etc.

The Vedas were compiled around the time of Krishna (c. 3500 B.C.), and even at that time was hardly understood. Hence they are very ancient and only in recent times has their spiritual import, like that of the other mystery teachings of the ancient world, begun to be rediscovered or appreciated even in India. Like the Egyptian teachings, they are veiled, symbolic and subtle and require a special vision to understand and use properly

But the historians will not agree they gave a different view to the subject. They said that vedas are a compilation of poetry and texts of various rishis.

RigVeda is the first and the oldest of all Vedas. I myself have had the opportunity to read a translated version of this huge compilation. RigVeda is more of a collection of mantras and texts from many different rishis and which at sometime won’t bear any similarity to the other parts. RigVeda gives an account of the life of that times and about the universe and Indra (the king of heaven ).

It is a collection of 1,028 Vedic Sanskrit hymns and 10,600 verses in all, organized into ten books (Sanskrit: mandalas).[36] The hymns are dedicated to Rigvedic deities.

The Yajurveda Samhita consists of archaic prose mantras and also in part of verses borrowed and adapted from the Rigveda. Its purpose was practical, in that each mantra must accompany an action in sacrifice but, unlike the Samaveda, it was compiled to apply to all sacrificial rites, not merely the Somayajna. There are two major groups of recensions of this Veda, known as the “Black” (Krishna) and “White” (Shukla) Yajurveda (Krishna and Shukla Yajurveda respectively). While White Yajurveda separates the Samhita from its Brahmana (the Shatapatha Brahmana), the Yajurveda intersperses the Samhita with Brahmana commentary. Of the

The Samaveda Samhita consists of 1549 stanzas, taken almost entirely (except for 78 stanzas) from the Rigveda. Like the Rigvedic stanzas in the Yajurveda, the Samans have been changed and adapted for use in singing. Some of the Rigvedic verses are repeated more than once. Including repetitions, there are a total of 1875 verses numbered in the Samaveda recension translated by Griffith. Two major recensions remain today, the Kauthuma/Ranayaniya and the Jaiminiya. Its purpose was liturgical, as the repertoire of the udgātṛ or “singer” priests who took part in the sacrifice.

The Atharvaveda Samhita is the text ‘belonging to the Atharvan and Angirasa poets. It has 760 hymns, and about 160 of the hymns are in common with the Rigveda. Most of the verses are metrical, but some sections are in prose. It was compiled around 900 BCE, although some of its material may go back to the time of the Rigveda, and some parts of the Atharva-Veda are older than the Rig-Veda though not in linguistic form.

The Atharvaveda is preserved in two recensions, the Paippalāda and Śaunaka. According to Apte it had nine schools (shakhas). The Paippalada text, which exists in a Kashmir and an Orissa version, is longer than the Saunaka one; it is only partially printed in its two versions and remains largely untranslated.

Unlike the other three Vedas, the Atharvanaveda has less connection with sacrifice. Its first part consists chiefly of spells and incantations, concerned with protection against demons and disaster, spells for the healing of diseases, for long life and for various desires or aims in life.

The second part of the text contains speculative and philosophical hymns.

The Atharvaveda is concerned with the material world or world of man and in this respect differs from the other three Vedas. Atharvaveda also sanctions the use of force, in particular, circumstances and similarly, this point is a departure from the three other Vedas.

I hope now you would have learned why this vedas are great but how much you read about them you can still know nothing until you actually read the Vedas.