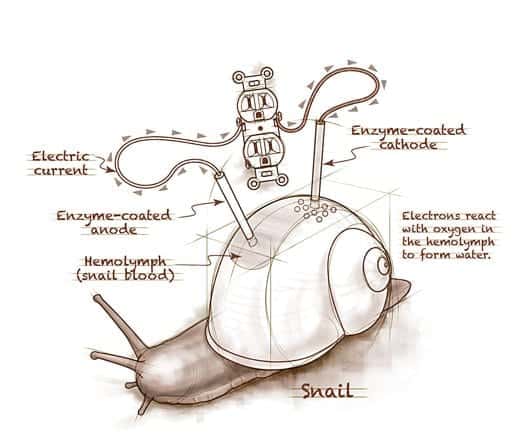 New and interesting bio-fuel cells of the future will generate power from glucose sugar present inside snail’s body. This could be achieved by drilling holes through the shell and implant enzyme-coated electrodes in the hemolymph (or snail blood) that naturally collects between the snail’s body and shell. This battery is also based on flow of electrons like any other battery. One electrode grabs electrons from glucose in the hemolymph. The electrons would then travel through an external circuit and will end up at the opposing electrode. The electrons react with oxygen present in the hemolymph to form water and energy. The power generated is however quite small, (in milliwatts) and runs out after a few minutes as the glucose is depleted. The snail loses energy in the process. It eats and drinks again and restores glucose levels of its body, so that it can generate power again. And the interesting and important part is that the snail isn’t harmed at all in the process.

There are two limits to the power output of the cell:
1. Amount of glucose in the body of snail
2. Time taken by glucose to diffuse over to the electrode

If such a bio-fuel cell is designed for a human then we can get a stronger and consistent flow of power because human blood has higher glucose content than a snail. Also the human circulatory system would constantly replenish the electrode with fresh glucose (snails don’t have a closed circulatory system). This concept in humans could be used to power devices such as pacemakers.

A snail cannot charge a cellphone, but still it can power small sensors. That’s another idea to employ snails, worms and insects for environmental monitoring and homeland security. 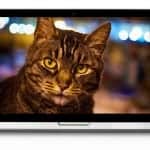 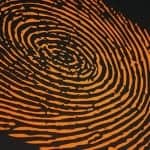