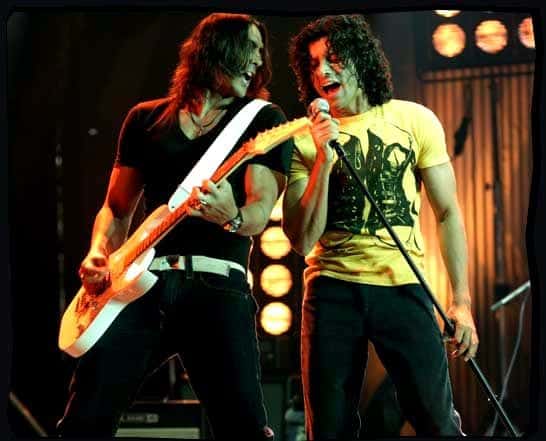 Filmmaker Abhishek Kapoor is still working on the script, but the excitement is building…

For all Rock On!! fans out there waiting for its sequel, we have an interesting news. Abhishek Kapoor has just finished off with the shoot of his new movie, Kai Po Che, which is  inspired by Chetan Bhagat’s The 3 Mistakes Of My Life. He recently said, “We are working on the script of Rock On!! 2 right now. It will have the same team with some new characters coming in. I am happy and excited about it, hopefully by next year it will go on floors.”

Farhan Akhtar, Arjun Rampal and Purab Kohli will continue to play their respective characters in the sequel of Rock On!! involving four rock band members. But this time Sharman Joshi will also join them if the rumors are correct.

Rock On!! is today recognized as a blockbuster movie in the history of Bollywood but it was really a cumbersome task for Abhishek to make it a blockbuster. He approached star-actors for the movie but none of them showed interest in being part of the multi-starrer. Even the fact that Farhan was launching his acting career with the film didn’t help him get any of the biggies on board.

And it shouldn’t be surprising that those actors whom Abhishek approached are now regretting their decision. But Farhan and Arjun must be thanking them for rocking their worlds with “Rock On!!”.

We wouldn’t be surprised if the same star-actors Abhishek approached then are now regretting their decision to not do the film. But Farhan and Arjun must be thanking them, ‘coz Rock On!! rocked the crowd and the actors’ careers went a notch higher.