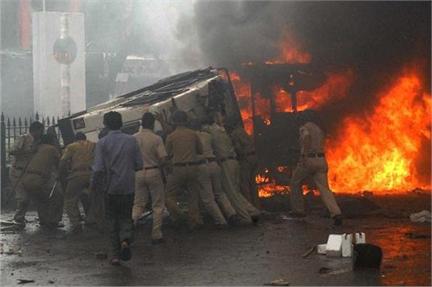 Riots In Mumbai Due To Assam Violence

Riots broke out in Mumbai over last month’s Assam violence. Demonstrators made huge damage by attacking shops and setting up news vans on fire.

When Independence Day for India is coming close, the country got trapped in riots over the Assam violence that happened last month. Violence broke out in Azad Maidan on Saturday. The demonstrators set up news vans on fires and attacked shops.

More than 70 people have been killed till now from July 20 in Assam due to clashes between Muslims and Bodos (an ethnic group indigenous to the region). Four Bodo people were killed on July 20 which made Bodo community pick up arms. They blamed Muslims for this killing and attack for revenge. Till now the bodies are still being found and a large number of Muslim residents have left there homes and shifted to camps. Even the Assam’s state government cannot guarantee their safety! There are reports of armed men roaming villages till now.

BJP (Bharatiya Janata Party) and several Bodo organizations have blamed the violence on illegal immigration from Bangladesh. According to them this the major source of disputes there.

Jonomohan Muchahary, president of EX-Bodoland Liberation Tigers Welfare Association, told the Indian Express, “The continuing influx has created pressure on land, and this has not only threatened the identity of the indigenous Bodos but has created lingering tension between them and the immigrants, culminating in the recent violence”.

While others claim that blaming the violence on illegal immigration is just an excuse. There are differences between communities from a long time which was most prevalent during 1983 when over 2000 Muslims were killed (Nellie massacre).

About the violence in the state last month, Assam’s Chief Minister said that the region is like a “a volcano that frequently erupts.” One reason for this is the overabundance of arms in the region. Another reason is that Assam is a home to 20 different tribes. Assam is an incredibly diverse part of India but has not been one of the beneficiaries of the fast-paced growth of the past decade. This has created a sense of insecurity among the people.

The central and state government are just blaming each other for not reacting quickly over mast month’s violence. There isn’t any discussion about the failure of authorities to provide employment and basic amenities to the people off the state. Assam also used to be a prosperous state as compared to the other parts of the country. But there was a sudden decline in its wealth during the last three years leading to high unemployment rates among the youth.

Meanwhile, the people are suffering. They have been forced to shift into refugee camps and the government isn’t even guaranteeing their safety. “If we go back, they will kill us,” Gobinda Bodo, a resident whose village was burned down last month, told Daily Pioneer. “The attackers have burnt my house down. I have neither received any compensation nor has the house been rebuilt. Where will I stay?”