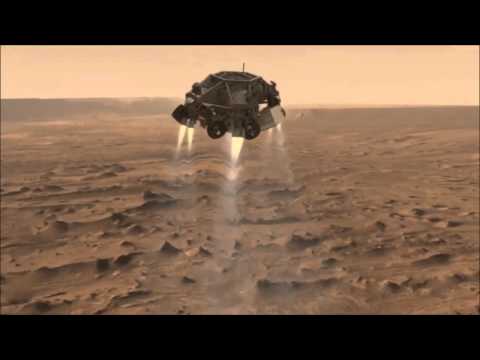 NASA’s Mars Curiosity Rover cleared the Martian skies and landed on a giant mould of layered rock inside an ancient crater at 1:32 AM EDT. The rover landed on the surface within seven minutes upon entering the atmosphere of Mars. These seven minutes were the most terrifying for NASA.

John Holdren, President Obama’s science advisor said about the landing,  “It’s an enormous step forward in planetary exploration, nobody has ever done anything like this.”

Mars Science Lab, better known as Curiosity, after travelling 352 million miles for over eight months entered the Martian skies at a speed of 13,000 mph around 1:24 AM EDT. Mars Curiosity Rover is the first spacecraft to make a guided entry on another planet. It steered itself through the atmosphere to burn off speed and then landed with the help of a 51 foot diameter parachute, a jet powered backpack and a ‘sky crane’. It landed at Gale Crater which is located near the equator of Mars.

The landing was an excited moment for the whole NASA crew. After its landing, the Curiosity rover moved with its six wheels on the surface of Mars and transmitted its first three pictures from Mars.

Allen Chen, Deputy Chief of the rover’s descent and landing team said “I can’t believe this, this is unbelievable”.

This $2.5 billion project is for looking for habitats where life could have taken root. Curiosity rover is supposed to spend two years at Mars for exploring the basin and some unusual areas on Mars.