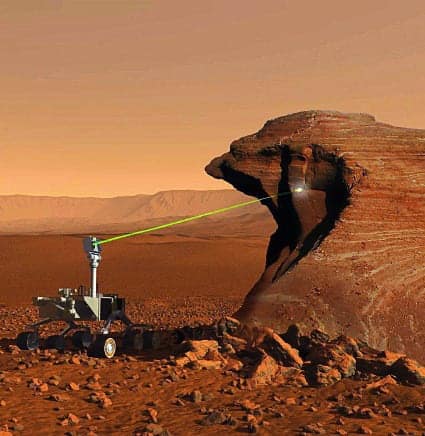 Curiosity Blasts Rocks On Mars With Its Laser

NASA’s space rover, Curiosity on Mars successfully completed the testing of its lasers by zapping its first rock with its laser beam on Sunday. It is an important step in the search of life-friendly habitats.

Chemistry and Camera instrument or simply ChemCam device mounted on Curiosity fired a flat a high-powered laser 30 tines in 10 seconds on a flat, fist-sized rock and blasted it into pieces. The ChemCam created plasma sparks that were analyzed by three light-splitting spectrometers to determine their chemical contents.

The rock or “Coronation” was just a target practice for Curiosity. The scientists are more interested in the composition changes of rocks during laser pulses. A single laser pulse lasted for about five one-billionths of a second.

The technology that ChemCam is using has already been used in other extreme environments like inside nuclear reactors and on the sea floor. But it’s the first time when it is used in space.